High Lord of the Summer Court

Tarquin is one of the seven High Lords of Prythian. He rules the Summer Court.

One of his lordlings was caught trying to escape Amarantha's court via the path leading to the Spring Court. Tarquin was forced to watch as Rhysand interrogated and tortured his subject.

Tarquin watches Feyre Archeron's trials and bestows a piece of magic, alongside the six other High Lords, which turns Feyre into an immortal High Fae.

Tarquin shows interest in Feyre and is drawn to her when she and Rhysand visit the Summer Court. The attraction is mainly due to his power, which, after the events Under the Mountain, lives within her. He is unaware of this. Tarquin occasionally flirts with Feyre, and she with him. They enjoy each other's company and he shows her around the Summer Court during her stay. He gifts her one of his precious family heirlooms after she admires his ideals of equality among the High Fae and lesser faeries. After her successful theft of the Summer Court's half of the book, Tarquin sends Rhysand three large blood rubies. These are sent to any offender who officially has a price on their head and is to be killed on sight. In this, the three rubies represent Feyre, Rhysand, and Amren.

Right after the battle at Adriata, Morrigan and Feyre meet Tarquin in his dining room. He thought that they had come to help Hybern finish off him and his court. When Feyre says that they have the same dream, he asks if that justified stealing from him. Rhysand then shows up and defends her, mentioning that they’re mates as well. Tarquin accuses them of letting his court be attacked, because of how Feyre destroyed the Spring Court, therefore letting Hybern’s forces dock there and then sail to Adriata. Rhysand flinches at the accusation but says his army will stay until Tarquin deems the city secure. Feyre tells Tarquin to tend to his wounded, to which he says not to give him orders. She tells him that they are at his disposal and walks out with Morrigan while Rhysand tries to explain about stealing the Book of Breathings. Tarquin commands him to get out and take the Illyrian legion with him. Rhysand asks him to come to the meeting with the High Lords, and Tarquin again tells him to get out and to tell Feyre not to give High Lords orders. Rhysand says that since she’s High Lady of the Night Court, she may do as she wishes. Tarquin let’s out a bitter laugh and says that Rhysand always did love to spit on tradition. He rescinds the blood debt bestowed upon Rhysand, Feyre and Amren in order to achieve a peace between all the High Lords during the meeting.

Tarquin fought in the battle between Hybern and Prythian along with the other High Lords.

Tarquin has white hair, crystal-blue eyes, and skin the color of dark mahogany and often wears blue clothes with an accent of gold.

Tarquin is kind, compassionate and thoughtful. He is not trained like other High Lords and seems to always speak his mind out of not being trained in court scheming and everything that comes with it. He wants to unite the High Fae and lesser faeries and desires to see both working and existing together as equals. 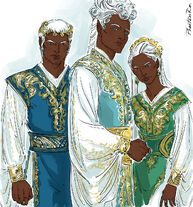 Retrieved from "https://acourtofthornsandroses.fandom.com/wiki/Tarquin?oldid=21442"
Community content is available under CC-BY-SA unless otherwise noted.