Gwyneth Berdara is a Priestess who works at the library in Velaris and Nesta Archeron's and Emerie's friend. She also helped revive the Valkyries, an elite group of female warriors, with Nesta Archeron and Emerie.

Gwyneth Berdara is High Fae but with a trace of lesser Fae bloodline. Her grandmother was a River Nymph that seduced one of the High Fae males of the Autumn Court. When her mother was born, she was unwanted by the Spring Court and the Autumn Court and was given to the temple at Sangravah. During the Great Rite/Calanmai, a High Fae male was chosen that night and Gwyneth's mother was involved in the sacred union. Gwyneth and her fraternal twin Catrin were conceived that night. Their mother, however, never found out who that male was.

When Gwyneth was 26 years old, Hybern invaded the Temple and Gwyn went to gather the children and ran for the catacomb tunnels. She smuggled them through a trapdoor in the kitchen but realized if she got herself out the soldiers would find the trapdoor and follow them. She decided to stay, covering the trap door with the rug and a table and that is when Hybern's soldiers burst in. The General asked her the location of the children which she refused to answer. Smelling a similar scent from one of the priestesses they captured, he dragged her twin sister Catrin in front of Gwyn and asked her again about the children. Gwyn refused to answer and the General beheaded her twin sister in front of her along with two other priestesses. She then was raped by the General. She was about to be forced against her will once again as the soldiers gathered but Azriel arrived and slaughtered all of them within moments. He wrapped her in his cloak and was then taken by Mor to live with the priestesses in the Library under the House of Wind. She was in a devastating state for weeks, unable to talk to anyone or sing.

Gwyn started working for Merrill in the library as her assistant, she feared Merrill because she has a vicious tongue. Gwyn came across Nesta Archeron one day and they both had a conversation where Nesta came off very strong, but Gwyn was not in the slightest scared. They then seemed to form a tight friendship and Gwyn started training with Nesta and Cassian. She later made friends with an Illyrian woman, Emerie. Gwyn, Nesta, and Emerie formed a very strong bond. Nesta regards them as her chosen family and sisters.

Gwyn along with her two friends, decided to go on the road of becoming a Valkyrie. During their training with Cassian, Gwyn learned the training methods of both the Illyrians and Valkyries. For the final test to become a true Valkyrie all three girls had struggled with cutting the ribbon. After the three of them have a heart-touching talk together, Gwyn was the first to cut the ribbon becoming a true Valkyrie.

After winning the Blood Rite, she returned to living in the Library but told Nesta she would attend her Mating Ceremony. Cassian and Azriel made up a list of mistakes the Valkyries made during the Blood Rite and the trio asked them to continue training them so they become true Valkyries one day.

Gwyn was very fearful of leaving the library in the House of Wind and often turned Nesta down on any offers to leave, due to struggles with her past trauma. However, she overcame those fears to care for her friends whenever they needed her. She is headstrong and brave, shown when she would rather fight and die with Nesta rather than leave her behind during The Blood Rite. Gwyn is very determined and has a competitive side, as seen when she was set on being the first to cut the ribbon, by staying late at the practice ring. Also, she was determined for Nesta, Emerie, and herself to complete the obstacle course before anyone else.

She is also described to be kind and sweet and a person that is easy to talk to. She has a charming irreverence noted by Azriel.

Gwyn is described as young, tall with slender, elegant limbs and a lithe and lean build. She has rich coppery chestnut pin-straight hair and large clear teal eyes. Gwyn also has a scattering of freckles on her nose and cheeks, as well as some dotted on her hands, which stand out against her pale skin. Despite being 3/4 High Fae, she has arched ears rather than pointy ears. Nesta has stated that Gwyn's beauty could even rival that of Mor and Merrill especially when she is radiating joy.

During Nesta and Gwyn's conversation, Nesta had been rude and mean. Gwyn had not seen the slightest bit fazed and continued to talk with her. One day, Gwyn had panicked giving Merrill the wrong book, and did not want a tongue lashing from her. Nesta had stepped up and switched the copy of books just to help Gwyn. Nesta often offered Gwyn to join her and Cassian to train, but Gwyn turned her down. Until one day, she showed up and learned to fight because she did not want to be weak anymore. Gwyn and Nesta became fast friends after this. During the Blood Rite, Gwyn refused to leave Nesta. Nesta had forced Gwyn to go to save her and Gwyn said she would never be able to forgive Nesta. Even though she was still happy to see her.

Gwyneth and Azriel first met when Gwyn was 26 years old in Sangravah when Hybern attacked the Temple. She was raped by a Hybern General. She was about to be forced against her will once again as the soldiers gathered but Azriel arrived and slaughtered all of them within moments. He wrapped her in his cloak and was then taken by Mor to live with the priestesses in the Library.

They met a second time when Gwyn started training with Nesta and Cassian. Cassian noticed that during the training Gwyn had been distracted, one eye on the other side of the ring where Azriel is. Later, Gwyn and Azriel are often seen observing each other in admiration and amusement. It's been hinted that Azriel and Gwyn train together behind the scenes when Azriel winnowed Cassian and Nesta and told them he would be back in an hour because Gwyn wanted him to go over dagger-handling. After Nesta and Cassian returned, Nesta noticed a new wood beam that Gwyn was focused on tying a white silk ribbon on, she wondered how Gwyn could anchor the wood into the stone, it is implied that it was Azriel who helped her.

Gwyn and Azriel are both very competitive people. During training, Gwyn was very focused on winning to wipe off the smirks on Cassian and Azriel's faces, especially Azriel's. She was often seen challenging Azriel. After she passed the Blood Rite qualifier, she extended her hand to Azriel to demand her prize. Nesta winked at an amused Azriel, telling him he was Gwyn's new ribbon.

In the bonus chapter of A Court of Silver Flames, Azriel retreated to the training pit after his almost-kiss with Elain and Rhysand pulling him away and demanding he stay away from Elain. He landed in the pit and Azriel noticed Gwyn training there, his shadows did not inform him of her presence. She greeted him with a smile. She wished Azriel a happy Solstice as he jokingly asked if she was kicking him out. She said she didn't mind sharing the ring but knew that he liked to be alone. Azriel noticed his shadows peering at her. She then asked Azriel if he was called a Shadowsinger because he sang, which he confirmed with a chuckle. He then instructed her on how to handle the dagger until she corrected her form. She thanked Azriel smiling broadly and Azriel sketched a bow and felt something restless settling in him. After he left he heard a faint beautiful singing following him and swore his shadows sang in answer.

The next day, he was planning on returning the necklace he bought for Elain to the shop but he found himself in the library beneath the House of Wind. He stood in front of Clotho's desk and slid the small box asking her to give this to Gwyn. Clotho asked him if it was a Solstice gift but he asked her to not reveal that it was from him. Clotho asked him why but he replied with "she doesn't have to know" or she could say it was from Rhys. Clotho told him that it would be a lie which slightly annoyed Azriel. To deflect the situation and avoid Gwyn knowing it was a gift from him, he asked Clotho to give it to another priestess who might appreciate it as he was not taking the box back.

Clotho agreed to give the gift to Gwyneth telling her that it was from a friend. Azriel thought that he wouldn't go as far as calling Gwyneth his friend but thanked Clotho anyway. As he was ascending the stairs he was picturing how Gwyn's teal eyes would light upon seeing the necklace. The chapter ends with Azriel tucking away the thought, consciously erasing the slight smile that it brought to his face. He buried the image of Gwyn's joyful face deep down where it glowed quietly, describing it as a thing of secret, lovely beauty.

Catrin and Gwyn grew up together in the temple at Sangravah. After their mother's death, Catrin took care of Gwyn. She was the one Gwyn looked up to. Despite their differences, the sisters love one another dearly.

Gwyn and Catrin used to braid bracelets and put little charms on them full of wishes for each other. They believed that each wish would come true once the bracelet fell off.

Even after two years, Gwyneth remains to grieve and carry the guilt of her twin sister's death. She misses Catrin every day. 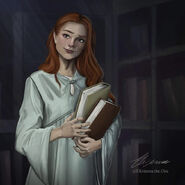 Artist credit: @elizianna.the.one
Add a photo to this gallery

Retrieved from "https://acourtofthornsandroses.fandom.com/wiki/Gwyneth_Berdara?oldid=20980"
Community content is available under CC-BY-SA unless otherwise noted.