A Court of Thorns and Roses Wiki
Register
Don't have an account?
Sign In
Advertisement
in: Characters, Females, Faeries,
and 9 more
English

Elain is Feyre's second-eldest sister who lived with Nesta, Feyre, and their father at the beginning of A Court of Thorns and Roses.

She was previously Mortal before being Made into High Fae after being thrown in the Cauldron by the King of Hybern.

Elain lives with her father and two sisters, Nesta and Feyre. During this time, Elain mostly tends to her small garden near the front yard of their house. Nesta hopes for Elain to get a good, wealthy husband to save them from poverty. After Feyre leaves with Tamlin, her remaining family is provided for by him.

Elain gets engaged to Graysen, a human man whose father is notorious for his Fae-despising ways. She receives an iron ring as a symbol of their engagement. Feyre returns to the family's new manor with her new friends, her family having regained their wealth thanks to Tamlin's largess. Elain is clearly uncomfortable with the Fae but welcomes them anyway, even if her wedding it's only five months away. Later in the book, she is Made into a Fae by Hybern, upon which Lucien discovers that he is her mate.

Elain speaks of seeing things that at the beginning make no sense. But later, she is decreed as a Seer by Azriel.

Where Nesta, while having been submerged in the Cauldron, has stolen some of its power, the Cauldron itself chose to grant Elain some magic as a gift for her seemingly never-ending kindness.

When Elain goes to Lord Nolan's residence—along with Feyre, Rhysand, Mor, and Nesta—to ask for sanctuary for any humans that will be evacuating their homes once the wall comes down, she reunites with Graysen, her human fiancé. However, Lord Noland reveals that he knows of Elain's turning and of her matehood with Lucien, a High Lord's son, thanks to Jurian having told him. Elain, still in love with Graysen, had wanted to return to him, but he rejects her. He demands that Elain take off her iron ring, but she refuses, and Graysen roars at her. Rhys steps in and demands that he let her keep the ring. Graysen becomes unpleasant and declares to Elain that he will not marry her—and that while he will take in whatever people are seeking sanctuary, will not accept her among them. Elain, clearly upset, says nothing, but Nesta steps forward and slaps Graysen in the face, saying that he never deserved her.

Elain and Azriel develop a friendship, and it is Azriel's coveted blade, Truth-Teller, that Elain drives through the King of Hybern's neck before Nesta delivers the final blow and rips his head off.

In the end, Elain asks Lucien to accompany them back to the Night Court, to which he instantly agrees.

Elain has golden-brown hair, like her sisters Feyre and Nesta, but has rich brown eyes like her father. In A Court of Mist and Fury it is said that she has delicate, pale legs and small breasts. Due to countless hours spent in her garden, her skin has taken on a sun-kissed hew. Feyre comments that her appearance is 'lovely' and she considers Elain the most beautiful of the three sisters. The King of Hybern also refers to Elain as "the prettier one" and after Elain is made fae, Feyre says she has become "infinitely beautiful".

Elain is gentle, kind, and arguably the 'softest' of her three sisters. She loves to grow things and will spend hours in the garden, tending to it. Despite acting like a purebred lady in every other regard, Elain appears to appreciate the hard work and labor required to create such beauty. She also has an interest in baking and will often help Nuala and Cerridwen in the kitchen.

Elain can also be very headstrong, primarily about her love life and independence. She is very resistant to accepting the bond between her and Lucien, stating that she belongs to no one but herself and does not need a male to be complete. She refuses to submit to the future the Cauldron has chosen for her and would rather choose her own fate, whoever or whatever that may be.

Because of her gentle nature, Elain is assumed by many to be weak and defenseless.

Elain is kind to her sister and grateful for when she provided for the family during hard times. In ACOMAF, Elain welcomes Feyre and her friends into her home, even though she knows that they are Fae.

Elain is on good terms with her sister, Nesta. Nesta is overly protective of Elain and worries about her sanity before she was proclaimed a Seer. It goes without saying that Nesta has a soft spot for Elain—she is even able to reason with Nesta and can persuade her to do things that no one else can.

At the end of ACOMAF, Lucien claims to be Elain's mate after she is Made Fae, and the mating bond snaps into place. However, she is taken to the Night Court by Rhysand and company before she has a chance to respond.

In ACOWAR, Elain meets and has a proper conversation with Lucien whilst at the Night Court. After falling into depression, she talks to Lucien about her engagement and how Graysen's betrayal impacted her family. He sits with her and tries to use the bond between them to help reach her and bring her back to herself. Elain tells Lucien that she can hear his heartbeat, and asks if he can hear hers. and he says that he can not. When Lucien volunteers to go to the Mortal Lands to find Queen Vassa, Elain appears to wish to say something to him before he leaves, but stops herself, and remains silent.

By the end of the book, Elain is seen asking Lucien if he is alright when she sees him covered in blood and gore after the battle. She also asks him to stay at the Night Court, to which he agrees. However, in ACOFAS and ACOSF, Elain appears to have returned to avoiding Lucien and showing no signs of wanting to accept their bond. Due to this, Lucien is able to form attachments with the Band of Exiles. 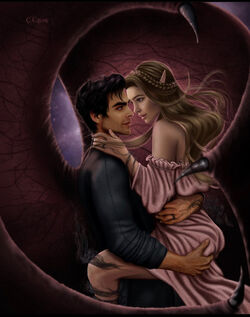 When the pair met in ACOMAF, it was during a tense dinner with their respective siblings. Elain was still a human and was very frightened to be in the presence of fae, yet she didn't appear to be as scared of Azriel. At the table, Elain clenched her fork as if she might protect herself with it, to which Azriel faintly smiled. As Elain tried to defend Nesta against Cassian, explaining how they were taught to fear the fae and the stories of their kind being disorienting, Azriel was the only one to show his understanding with a polite smile - to which she visibly relaxed. Although the entire meal was quite forced and strained, they both seemed to notice each other's less confrontational nature and Feyre even referred to them as "the only two civilized ones" as they both tried to make polite conversation. Elain asked Azriel if he and Cassian could truly fly and he told her they were born hearing the song of the wind, which she said was very beautiful. Elain also seemed to be reassured by Azriel's ease at the ending of the dinner, showing how she was already starting to trust him. Later in the book, when Feyre discussed with Rhys how her sisters would fare in Velaris, she thought Elain would like Velaris though "she'd probably cling to Azriel" to have some peace and quiet. Feyre smiled at the thought of how "handsome they would be together,"

During ACOWAR, Elain and Azriel form somewhat of a friendship. He keeps her company while she recovers from being Made. Feyre has mentioned once how she thinks the two would be a handsome couple if they ever got over the current obstacles in their way (aka Azriel's unrequited pining for Mor and Elain's broken heart over her ex-fiancé, Graysen). She goes as far as to ask Rhysand why the Cauldron didn't make Elain and Azriel mates, rather than Elain and Lucien. Rhys responds by explaining that sometimes mates aren't right for each other and the bond can be rejected if that's the case. Later in the book, when Elain is captured by Hybern, Azriel risks his life to save her, ignoring even Nesta's protests of how it will most likely cost him his life. He even lends her "Truth-Teller", which he has never let anyone so much as touch in his 500+ years of life.

In ACOFAS, Elain gives Azriel a powder as a solstice gift, meant to treat the headaches he seems to get from his friends all the time. This causes Azriel to laugh with a joy Feyre has never heard before and he thanks Elain, saying the gift will be invaluable. The pair spend Solstice evening together talking in the sitting room as Elain explains to him her plans for expanding the garden.

In ACOSF, Nesta seems to notice a mutual attraction between Elain and Azriel. She describes them as sharing a charged look and, when she catches Azriel avoiding the fire on Solstice, guesses that it is because Lucien is there and Azriel is avoiding him because of the mating bond Lucien shares with Elain (this is confirmed in Azriel's POV Chapter). Later that night, Azriel catches Elain trying to discreetly place her gift for him next to his other presents. She reveals them to be a pair of earplugs, meant to help him sleep better with all the noise from Nesta and Cassian's nightly "activities", which makes him laugh. Azriel then gives her his own present: a glass rose charm necklace. She says it is beautiful and asks him to put it on her. This led to the pair sharing an almost-kiss before a furious Rhysand caught them (unbeknownst to Elain) and stopped Azriel, demanding that he meets in his office. Azriel retreats by forcing himself to say "this was a mistake," and he couldn't stand to see the bleakness in her face, so he disappeared. Azriel forced himself to pull away, saying that the almost-kiss was a mistake. Elain is left confused and hurt as to why Azriel stopped and thinking she had misread his intentions, apologizes to him. He deflected the apology, saying she should never apologize to him before he disappeared without another word.

From the coloring book