General and Commander of the Night Court's armies

He's Nesta Archeron's mate and currently resides with her in the House of Wind.

Cassian is the bastard son of an Illyrian war-camp laundress and an unknown warrior. As soon as his mother weaned him and he could walk, he was left in a distant war camp, Windhaven, for training. As a bastard, he received nothing and had to find his own shelter, food, and clothes. Cassian resorted to challenging other kids to fight and got their clothes as a prize.

Years later, when was old enough and strong enough, he came back to the camp he had been born into and discovered that the males of the camp had worked his mother until she died.

When Rhysand was taken to the same camp for training, Cassian beat him into a bloody mess for his new, clean training clothes, costing them three lashings each, which was considered an encouragement to keep fighting by Illyrian standards.

That night, when Rhysand was home with his mother, he saw Cassian walking through the mud to get to tents outside the camp. Rhysand did not take it well, understanding for the first time what it was to be warm, safe, and cared for. He woke Cassian in the middle of the night to take him to his house. Rhysand's mother took Cassian in and provided him with a home and shelter from then on. However, Rhysand and Cassian hated each other until Azriel arrived at camp and they decided to be allies. They made his life a living hell. As they and the other males around them grew older, the three males realized everyone else hated them enough that they had better odds of survival sticking together.

The other males knew that the three were different. They were stronger, faster, like the Cauldron knew they'd been set apart and wanted them to find each other. As their power grew, Cassian and Azriel became the first bastard-born Illyrians to ever receive a siphon. When they were begrudgingly appointed them, it had every warrior in every camp across the mountains sizing them up.

During the War, when Rhysand's father saw that his son had allied with the two most powerful Illyrian warriors in history, and fearing the three warriors would turn against him and rival him in power, he separated them. Rhysand was given command over a legion, Azriel was kept as his personal shadowsinger in his court, and Cassian was put in a different legion to be a common foot soldier, even when his power outranked any of the war-leaders. The three males only saw each other on battlefields for the seven years the War raged. When casualty lists were sent around the Illyrians, they would read each one, wondering if they'd see their friends' names on it.

Although for an Illyrian bastard, he was expected to be a bottom-ranked soldier forever, Cassian's strength and power took him to the top of the ranks as a General Commander of the Night Court's armies and into Rhysand's Inner Circle, once Rhysand became the High Lord of the Night Court.

Cassian is introduced to Feyre at the House of Wind when Rhysand introduces her to his Inner Circle after she leaves the Spring Court. He asks her how she made the bone ladder to trap the Middengard Wyrm. This makes her angry and she retorts by asking, "How the hell did you manage to survive this long without anyone killing you?" This makes Cassian tip his head back and laugh. During the dinner, Cassian is the one who tells the story of how he, Azriel, and Rhysand met and became friends. He offers to train Feyre so she can fight.

As the General of the Night Court's armies, he trains Feyre in battle combat. He accompanies Feyre and Rhysand when they go to her family's estate. There he meets Nesta. He finds her to be an equal match in quarreling and taunting. Eventually, it is hinted he has a more physical interest in her. Later on, during the second visit with the mortal queens to the estate, Cassian promises to help take care of her and her family if a war begins. When they are all trapped in the King of Hybern's castle, he stirs when he hears Nesta screaming, despite being unconscious and having his wings shredded.

A Court of Wings and Ruins

Cassian, along with Azriel, went to rescue Feyre and Lucien from Eris and his brothers. Cassian fights off Eris, while Azriel and Lucien fight off the others. They only stop when Feyre commands them to. Cassian and Azriel take Feyre and Lucien to meet up with Morrigan, who then takes them to Velaris. Later, Cassian goes with Feyre and Rhys to see Feyre's sisters. When Nesta starts getting angry, Cassian points out that Nesta refuses to train, so there isn't a lot she can do against them.

Cassian is tall with black, shoulder-length hair, massive, membranous wings, tan-skinned, and hazel eyes. His features are described as being rough-hewn, as though he'd been made of wind, earth, and flame, and all these civilized trappings were little more than an inconvenience. His body is powerful and muscled. He wears a long sword strapped down the column of his spine.

Illyrian warriors typically wear one or two Siphons, to channel their raw power into something useful. Cassian requires seven of these to control his immense power.

When Mor was sold in marriage to Eris, the eldest son of the High Lord of the Autumn Court and Lucien's eldest brother, Rhysand took her to the Illyrian camp. When she saw Cassian, she decided that she wanted to lose her virginity to avoid being given to Eris. As Cassian was the strongest warrior, she chose him. However, when Rhysand heard, he fought with Cassian and Mor decided to step away from him to avoid further problems within the group of friends. They have never been together since, but remain close friends and enjoy flirting and bantering with each other.

Cassian considers Nesta a challenge and a worthy opponent. He initially confronts Nesta for letting Feyre take care of them while she did not do anything to help. Eventually, it is hinted he has a more physical interest in her. Later on, during the second visit of the mortal queens to the family's estate, Cassian promises to help take care of her and her family if a war begins. When they are all trapped in the King of Hybern's castle, he stirs when he hears Nesta screaming, despite being unconscious and having his wings shredded.

During A Court of Wings and Ruin Cassian is shown to treat Nesta flirtatiously. They show feelings towards each other with sly glances and Cassian making his sexual jokes. When Cassian is injured, Nesta waited outside his tent until she heard that he was going to be okay. When the King of Hybern injures Cassian severely, Nesta refuses to leave him and shields his body with her own, for if one of them was going to die, the other would die with them. Cassian kisses Nesta and tells her he wishes they had more time.

In Wings and Embers, Cassian makes sexual advances towards Nesta, asking if she has ever been with a male, which makes Nesta remember nearly being raped by a human named Tomas Mandray. Cassian notices the distress on her face and realizes Nesta had a bad experience with a male and tells her he will hunt the male down if Nesta wishes.

In A Court of Frost and Starlight, Cassian is struggling with what is happening with Nesta. He and Nesta have not spoken at all, or only exchanging a few words here and there. He visits his mother's supposed grave, not knowing if she was buried here, yet his thoughts get distracted by Nesta, though he ignores them. Cassian mentions that he has multiple poses for Nesta, ranging from "I Will Eat Your Eyes For Breakfast" to "I Don't Want Cassian to Know I'm Reading Smut." While "decorating," Cassian and Feyre get drunk and he makes a joke about Amren. Amren teases him about starting a war he can't win, especially with Nesta coming for Solstice in two days. Cassian's mood changes and he snaps at Amren. She also says that she will enjoy seeing Nesta shred into Cassian if she is sober enough. Cassian tries to avoid anything concerning Nesta for a while until Solstice. When Nesta shows up to Solstice, Cassian tries to act relaxed and the entire time they do not speak a word to each other.

After dinner, Nesta leaves after Feyre pays her rent and gives her extra money. Cassian chases after her and goes to walk her home, on the other side of the city. He notes that Nesta has lost weight, but still looks as beautiful as she did when he met her at her father's house. Nesta notices something in his hand and Cassian explains that it is a gift for her. She says she doesn't want it or anything from him. Cassian thinks back on how he tells himself that he doesn't care she is having sex with different males and he doesn't care who she lost her virginity to. He told himself that he doesn't want to know if he meant anything to her. They argue some more before she turns to leave and he grabs her hand, pleading with her to talk to him. She gives him a vicious look, then walks away leaving him behind. Cassian throws her present into the Sidra before he flies after her until she gets into her apartment. He waits on a nearby roof until she blows her candle out. Cassian goes back to the town house late in the night and knocks back a drink before going to his shared room with Azriel and Mor follows him.

In A Court of Silver Flames the two struggle a lot with Nesta's situation and eventually initiate a sexual relationship, both convinced they're not enough for the other. On the Solstice, however, they finally commit to each other and their mating bond snaps into place. Cassian avoids her afterward, not wanting to scare her but when he eventually voices what they've both aware of, that they're mates, Nesta gets angry as she doesn't want to be defined by fae words and lose the last tie she has to humanity. In the end, when Cassian nearly plunges a knife into his own heart to avoid hurting her Nesta explodes with the force of the Cauldron, saving both their lives. She eventually accepts the bond and they have a mating ceremony, receiving the House of Wind as a gift from Feyre and Rhys. Nesta also reveals to Cassian she's changed herself, learning from what the Cauldron did to Feyre in order to heal her from Nyx's birth, so they'll be able to have kids when they are ready.

Feyre and Cassian develop a close friendship. Cassian is the first person she meets in Prythian who had ever known what it was like to be hungry and desperate like she had been. When telling her the story of how he grew up, their eyes meet and she swears she can see "the words in his eyes: You know what it is like. You know the mark it leaves." 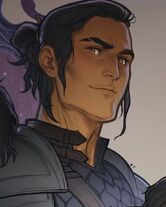 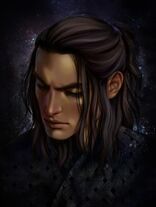 Retrieved from "https://acourtofthornsandroses.fandom.com/wiki/Cassian?oldid=21898"
Community content is available under CC-BY-SA unless otherwise noted.