Spymaster of the Night Court

Azriel is the bastard son of an Illyrian lord. For eleven years he lived with his father, stepmother, and two older half-brothers. The two boys and their mother were cruel and spoiled. While living in his father's keep, his stepmother kept Azriel in a cell with no windows or light. He was allowed to come out only for an hour a day, and to see his mother for one hour every week. He was not allowed to train or fly, even when his Illyrian instincts urged him to do so.

When he was eight, his two cruel half-brothers decided it would be fun to see what happened when you mixed an Illyrian's quick healing gifts with oil and fire. They poured oil on his hands and lit them on fire. His father's warriors heard Azriel's screaming, and rescued him but not quick enough to save his hands, leaving them permanently scarred.

At the age of eleven, he was dumped in the Illyrian training camp, Windhaven, where he was well received by the camp lords due to his shadowsinging gifts. He eventually met Rhysand and Cassian, as they were training at the same camp. At this point, like Cassian, Rhysand's mother took him in, for she was a friend to Azriel's mother.

When Rhysand's father saw that his son had started to rival him in power and had allied with the two most powerful Illyrian warriors in history, he separated them in fear that they would eventually turn against him. Rhysand was given command over a legion, Azriel was kept as his personal shadowsinger, and Cassian was appointed as a foot soldier.

Once Rhysand became the High Lord of the Night Court, Azriel was appointed as spymaster and became part of his Inner Circle.

Azriel is described as classically beautiful, but near-unreadable. He is tall, with dark hair, tan skin, and massive Illyrian wings. His eyes are hazel and the planes of his face are elegant. His Illyrian training is described to have shaped his body to be extremely powerful and muscular. He has brutal scars on both hands. Azriel is constantly surrounded by shadows as if even the light shied from him. A cocoon of silence seems to pulse around him.

Illyrian warriors typically wear one or two Siphons to channel their raw power into magic, but Azriel requires seven cobalt Siphons to maintain his power. He keeps his dagger, Truth-Teller sheathed at his thigh.

Azriel is a shadowsinger and is physically powerful due to his Illyrian background. As a shadowsinger, he has the predisposition to hear and feel things others can't. He can merge into shadows and move throughout them. He is also the bearer of the magical knife, Truth-Teller.

Azriel has a romantic interest in Mor, yet he has never acted upon his feelings. Mor tells Feyre that his inhibitions are probably related to the fact that he believes he is not worthy enough for Mor.

However, his interests aren't returned by Morrigan, nor will they ever be, as she confesses to Feyre that she is a bisexual and prefers the company of females to males. Azriel does not know this, however, and continues to quietly pine away for her.

The twins work as Rhysand's personal servants and spies. Azriel trained them and the twins report to him on spymaster matters.

When the pair meet in ACOMAF, it is during a tense dinner with their respective siblings. Elain was still a human and was very frightened to be in the presence of fae, yet she didn't appear to be as scared of Azriel. Though the entire meal is quite forced and strained, they both seem to notice each other's less confrontational nature and Feyre even refers to them as "the only two civilized ones" as they both try to make polite conversation. Elain asks Azriel if he and Cassian can truly fly and he tells her they were born hearing the song of the wind, which she says is very beautiful. Elain also seems to be reassured by Azriel's ease at the ending of dinner, showing how she is already starting to trust him.

During ACOWAR, Elain and Azriel become good friends. He keeps her company while she recovers from being Made. Their close relationship has led many to suspect a potential romance in the future, although nothing has been confirmed yet. When Elain is captured by Hybern, Azriel risks his life to save her, ignoring even Nesta's protests of how it will most likely cost him his life. He even lends her "Truth-Teller", which he has never let anyone so much as touch in his 500+ years of life.

In ACOFAS, there appears to be even more hints towards a potential future romance between the two. Azriel reveals that, despite being Rhys' spymaster, he does not keep tabs on Lucien because he is Elain's mate. Rhysand infers it is so he will not know if the pair ever seek each other out. When Rhys asks Azriel to elaborate, he just says it would be an invasion of Elain's privacy if he did, however, Rhysand seems unsure that that is the true reason. For Solstice, Elain gives Azriel a powder as a gift, meant to treat the headaches he seems to get from his friends all the time. This causes Azriel to laugh with a joy Feyre has never heard before, thanking Elain and saying the gift will be invaluable. The pair spend Solstice evening together talking in the sitting room as Elain explains to him her plans for expanding the garden.

Feyre meets Azriel for the first time at the House of Wind, where Rhysand takes her to meet his Inner Circle after she leaves the Spring Court. They develop a good friendship. It's strengthened when Azriel offers to train Feyre how to fly, saying that because he also learned later in his life, he knows what mental blocks can happen. 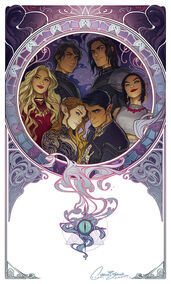 Add a photo to this gallery
Retrieved from "https://acourtofthornsandroses.fandom.com/wiki/Azriel?oldid=19929"
Community content is available under CC-BY-SA unless otherwise noted.