Gallery of illustrations, fanart or images that inspired, or based on the creation of Amren. The sources of each image is found on the file pages. 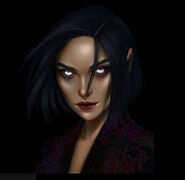 [tumblr - projectnelm] Caption: “If that day comes, I’ll find a way to break the spell on Amren and unleash her on the world. And ask her to end me first.”

[tumblr - rowatree] Caption: “Even the High Lord at my side felt like a wisp of shadow compared to the power thrumming from her.” and again, Amren. I don’t think I’d ever get tired of drawing her

[tumblr - rowatree] Caption: “His attention was fixed wholly on Amren - as if he knew where the biggest threat lay. My favorite character and one of the best female characters I’ve ever seen in a book: AMREN <3

[tumblr - wisegirldraws] Caption: You’re in luck, cuz I can’t seem to stop drawing her! She’s so smol but scary and I love her ≧◡≦ !!!

[tumblr - tarajah] Caption: I liked Amren throughout the entire book, but I knew I loved her when she used the ruby that represents the bounty on her head, as a paper weight.

[tumblr - meahd] Caption: Listen if I didn’t want Amren to go home so bad I’d ship them so much

Retrieved from "https://acourtofthornsandroses.fandom.com/wiki/Amren/Gallery?oldid=19956"
Community content is available under CC-BY-SA unless otherwise noted.