Second To High Lord and Lady of the Night Court

Amren is part of Rhysand's Inner Circle, and is the Second-in-Command of the Night Court. She is a creature of unknown origin from another world. She was a former inmate of the Prison. She currently inhabits the body of a High Fae.

Amren is a former inmate of the Prison who is said to have escaped after a few millennia of imprisonment by giving up "her grace and perfect immortality" to bind herself to a High Fae body.

She is an extremely powerful creature of unknown origins, and like Feyre, was not born High Fae, but Made. She is said to be older than even Prythian and is believed to have slipped into the world from a different realm when Prythian was forming, only to be trapped when the rift she came through closed at will. When Nesta asks her what she was, Amren replies that she was "a messenger and soldier-assassin for a wrathful god who ruled a young world."

Amren drinks blood to sustain herself and hoards baubles and belongings, threatening unspecified but deadly punishment towards anyone who would try to steal them.

Amren is introduced to Feyre after Feyre takes up residence in the Night Court. She bickers often with Cassian, and scares Nuala and Cerridwen. Rhysand explains that Amren is his Second-in-Command, having gained the title soon after his ascension to High Lord. She is part of his Inner Circle and his political advisor.

At the dinner at the House of Wind, where Rhys introduces Feyre to his Inner Circle. Amren mentions that only once before was a human Made into an immortal. She remarks that it is interesting that it should happen again right as all the ancient players have returned. She tells Feyre that her very blood, her veins, her bones were Made. She is a mortal soul in an immortal body.

When Rhysand and Feyre decide to visit the Bone Carver, Amren offers Feyre a necklace that she claims helped her escape the Prison. She threatens to hunt her down if she does not return it. She claims the necklace will prevent the Prison from being able to hold Feyre. After successfully getting into and out of the Prison, Feyre tries to return the necklace to Amren. Amren reveals that it was actually just a piece of jewelry she found at the bottom of a drawer, given to her by Rhysand two hundred years before. She tells Feyre she gave it to her to help her find the strength and courage to face her fears in order to go underground to the Prison, then allows Feyre to keep it.

Feyre asks Rhysand what Amren's role would be in a war where his armies fail and Cassian, Azriel, and even Mor is gone. He replies that if that day comes, he "will find a way to break the spell on Amren and unleash her on the world. And ask her to end him first."

Amren continues to translate the Book of Breathings, and later begins training Nesta to use the magic she stole from the Cauldron. She begins a relationship with Varian after he shows up at a meeting and kisses her.

Amren disagrees with Rhysand's plan to break the Bone Carver out of the Prison, not trusting the monster to obey orders. She later accepts it is necessary.

During the final battle with Hybern, Amren makes her way to the hidden Cauldron with Feyre, intending to use their combined power to nullify its powers with the Book of Breathings. She seemingly betrays Feyre when the High Lady places her hand on the Cauldron and Amren doesn't start the spell to nullify it, but explains that the spell the Suriel told Feyre about was an unbinding spell for her. She asks Feyre to be a conduit for the spell to work, so she may take her true form and wipe Hybern's army away.

Varian arrives and begs Amren not to do this, but she sadly explains that she used to watch the humans in her world, and how they loved, and she now understands what it means because of him. She leaves a message for Rhysand and warns the two against moving when she's unbound, as it will attract her attention. She jumps into the Cauldron and Feyre uses the spell to unbind her.

Amren bursts from the Cauldron in her true form and breaks it apart. She appears as a being of pure light and fire, with burning feathered wings and a crown of light, and acknowledges Feyre and Varian before decimating Hybern's army. She burns herself away in the process. Varian is heartbroken.

The Cauldron, broken, begins leaking its essence into the world. Feyre and Rhysand use the last of their magic to fix it before it destroys reality, but Rhysand dies as the spell uses all his magic. The High Lords bring him back in the same way they did with Feyre, and he jokingly mentions they should pull Amren from the Cauldron before she catches a cold. Azriel, Varian, and Mor pull her out, and Rhysand explains that she was there when the Cauldron was healing, moving on to the afterlife. He says he reached out a hand and asked if she wanted to come back. When she opens her eyes Feyre notices that her eyes are normal, and realizes that Amren gave up her form and is truly a High Fae.

Back in Velaris, Amren is irritated by the prospect of having to eat real food, and trades banter with Cassian before remarking to Nesta that she's surprised she didn't take the King of Hybern's head as a trophy. She is berated for making the joke in poor taste, but sarcastically states that she's entitled to say what she wants since she saved all their asses. She walks away, and Elain remarks that the new Amren is even crankier than the old one. Rhysand assures Feyre that Amren will remain his Second, and will probably develop some new terrible power to terrorize them with.

Amren is one of the only ones who accepts Nesta for who she is. Amren stops drinking blood because she has a new body. When Amren eats normal food it sometimes makes her nauseous and so she is not as inclined to eat it. Amren now is in a relationship with Varian and invites him to the Winter Solstice get-together. Varian dotes on Amren as well.

Amren also finds it very annoying that she has to use toilets like normal people and complains about it all the time.

Amren is described as small, being several inches shorter than Feyre. She is thin, has smooth, tan skin, chin-length, silky, straight, black hair, and a pretty face bordering on plain. Amren has silver eyes that seem to swirl like smoke under glass. After becoming truly High Fae, her eyes become a normal silver color. When Feyre first meets her, she feels like even Rhysand felt like a wisp of shadow compared to the power thrumming from her. Her voice can be soft, but is honed sharper than any blade. She has slim, small fingers.

Amren is said to be vain, cunning, and temperamental. She "likes to hoard her baubles and belongings like a firedrake in a cave." She has an infamous temper when provoked. However, she is shown to possess some caring qualities. For instance, she offers Feyre a necklace so that it could give her courage in The Prison. Besides that, Amren is selfless, as she sacrifices herself to save Prythian. She is very smart and develops a love of jigsaw puzzles.

"We are lucky to have him, Feyre. I have known many High Lords. Cruel ones, cunning ones, weak ones, powerful ones. But never one that dreamed. Not as he does. "
— Amren to Feyre

Amren and Rhysand have a close relationship. Rhysand has a high respect for her and often buys her jewelry from the Velaris Palaces. Rhys confesses to Feyre that he was once stupid enough to invite her to his bed and she laughed herself hoarse and declined the offer. He tells Feyre that he is the most powerful High Lord in Prythian's history, and mercy interrupting Amren is something he's only done once in the past century. When Rhys offered to make her his Second, no one had ever asked her before, so she said yes, to see what it might be like. She has since found that she enjoys it. As his Second, she is Rhys' political adviser, walking library, and doer of his dirty work.

"The prick can't decide if he hates me or wants me."
— Amren

After meeting in the Summer Court, Amren develops a complicated relationship with Varian. Varian's feelings towards her are divided between fear and interest. While, Amren is tempted by the prospect of a relationship, but decides not to start one.

After the blood rubies were sent to the Night Court, Varian sends her a ruby necklace, which calms Amren's anger and her desires to destroy Adriata. This necklace is seen on her nightstand as if she slept looking at it.

The two start a physical relationship in A Court of Wings and Ruin and Amren indirectly says that she might love him before Feyre unbinds her. Varian is visibly relieved and happy when she emerges from the Cauldron later on.

In A Court of Frost and Starlight, Amren invites Varian to the Winter Solstice party and he brings her many presents from the Summer Court and eventually buys her more in Velaris. Varian fits in very well with the group as well. 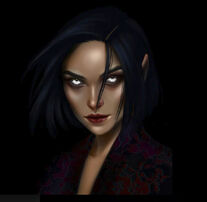 Retrieved from "https://acourtofthornsandroses.fandom.com/wiki/Amren?oldid=21817"
Community content is available under CC-BY-SA unless otherwise noted.