Amarantha was a former general of Hybern who proclaimed herself as the High Queen of Prythian. She was one of the characters in A Court of Thorns and Roses.

Amarantha used to be the King of Hybern's greatest general, but during the War between Faeries and Mortals, her younger sister Clythia fell in love with a mortal named Jurian. Amarantha loved her sister and could see that Jurian was simply using her for information, however she was unable to convince Clythia of this fact and couldn't bring herself to kill Jurian when it would hurt her sister.

After months of pretending he loved her, Jurian brutally murdered Clythia, as he had the information he needed, and left the pieces of her for Amarantha to find. Amarantha's wrath was said to have been able to bring the skies down, but the King of Hybern ordered her to stand down. Jurian's actions caused Amarantha to develop a deep hatred of mortals.

Amarantha eventually had her final confrontation with Jurian and defeated him after a long battle. She then tortured him for weeks, and ignored the King of Hybern's orders to march to his aid until she'd killed Jurian, an act that cost him the War. After Jurian was killed, she kept his eye and finger, and embedded his life force within the stolen body parts. Because of this, Jurian was unable to pass on into the afterlife and was damned to an eternal half life, trapped within the artifacts. His eye, which was kept within Amarantha's glass ring, was noted to move at certain times, implying that Jurian was still alive and somewhat observant.

After the Treaty was made, Amarantha butchered her own slaves rather than free them. Despite this, centuries later, the High Lords of Prythian believed her lies, that her sister's death had changed her and that she wanted to open trade routes between Hybern and Prythian. Unbeknownst to the High Lords and the King of Hybern, she brought her own personal forces over along with the trade ships and plotted for years to amass an army and destroy the Mortal Lands. Fifty years after her arrival, she tricked the seven High Lords out of their power, using a spell stolen from the King, and took control of Prythian within days. She then set up her court in Under the Mountain, a sacred place for Prythian, and took Rhysand as a lover as special punishment for his father's involvement in the death of Tamlin's father.

Tamlin, Lucien and all other creatures, High and Lesser Fae alike, grew to fear Amarantha after she ripped Lucien's eye out when he insulted her during an attempt to broker peace. Later, to make "amends", she invited the whole Spring Court to a masked ball where, because of Tamlin's continued refusal of her advances, she cast a spell upon all members of the Spring Court, permanently fixing the masks to their faces. However, she offered to lift the spell, if only Tamlin would become her lover; which is an offer he refused. She might have let it go, had he not gone on to say that even her sister preferred a Mortal's company to hers, and that he felt the same.

For this, Amarantha turned his heart to stone, and cursed him and all his court yet again. She decreed that he had 49 years to find a Mortal who would freely confess her love for him, although that Mortal must originally harbor a deep mistrust and hatred for the Faeries, going as far as to slay one of them in cold blood. If he did not manage to complete this task, she would claim him and all of his subjects as slaves and imprison them in Under the Mountain. She went on to rule unchallenged, while Tamlin worked to break the curse. During this time she sent all manner of monstrous faeries against his borders to test his strength.

Not three days before the curse's deadline, Tamlin sent Feyre back to the Mortal Lands, to her home, in an attempt to protect her from Amarantha, having been visited by Rhysand and being uncertain of where his loyalties on the matter might lie. Although she was already in love with him, Feyre had not yet said these exact words, and this meant that Tamlin, having failed his task, was now a subject of Amarantha, along with every other member of the Spring Court.

Feyre had absolutely no knowledge of this, but when she returned to the Spring Court, she found Alis who regaled her with the full tale.

Feyre rushed to save her lover and the Spring Court, journeying to Under the Mountain to seek Amarantha. She was brought before the dark queen by the Attor, and publicly proclaimed her love for Tamlin. Amarantha was intrigued, and offered her a chance to prove her worth, her devotion to Tamlin, and win the freedom of the Spring Court. She decreed that Feyre must either complete three grueling tasks or answer her enigmatic riddle. The answer to the riddle eluded Feyre so she opted for the tasks, and with the help of Lucien and Rhysand, successfully finished all three. Amarantha, clever and cruel, denied Feyre her prize, claiming that she only promised she would free the Spring Court if Feyre successfully completed her trials, but did not specify when. It was only in the case of the riddle that Amarantha promised immediate freedom. Amarantha then proceeded to publicly torture Feyre, and although both Tamlin and Rhysand attempted to save her, Amarantha killed her. However, in Feyre's final moments, she figured out the answer to the riddle and whispered it with her final breath.

This utterance broke Amarantha's binding curse, freeing Tamlin and all the seven Courts from her dominating grasp. Tamlin, having reclaimed his full power, was able to easily defeat Amarantha and subsequently killed her in a mad fit of rage and grief.

Feyre noted that Amarantha's appearance didn't radiate darkness and bitterness but someone who had a charming allure. She had neatly braided red-gold hair, which wove elegantly through her golden crown. Her skin was white, which both complemented her ruby lips and her crown. Her elegance was shown to have an atmosphere of being contrived and cold. Being High Fae, she also had slightly pointed ears.[1]

Amarantha was notably cruel and vindictive, and delighted in torturing others both physically and emotionally. She was ruthless, as seen by her treatment of her Mortal slaves, and was willing to defy orders from her King, who was more powerful than her, in order to get her revenge. She was noted as being especially wretched and vicious during the War.

Despite her sadistic nature, Amarantha did feel love for her younger sister, and was protective of her to the point of sparing Jurian so she wouldn't be hurt. It was her sister's death, at the hands of a Mortal, that caused Amarantha to develop such hatred for them. Due to Jurian's betrayal, Amarantha also harbored the belief that Mortals were fickle and unable to feel true love for faeries as they would always betray them.

Amarantha had very powerful magic, even more so after she stole power from the High Lords of Prythian. She was able to control faeries using this power, and to a lesser extent the High Lords themselves. She was also very knowledgeable about spells and curses, as she was able to cast long-lasting and very specific magic on her enemies, including binding a life force to body parts.

Amarantha was very close friends with Tamlin's father as they both disliked mortals and fought to restrict their freedom. She was so upset by his death that she took special care in punishing Rhysand, whose father was responsible. 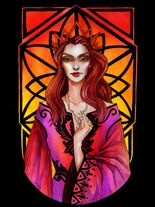 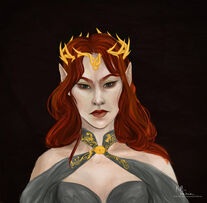 Retrieved from "https://acourtofthornsandroses.fandom.com/wiki/Amarantha?oldid=21407"
Community content is available under CC-BY-SA unless otherwise noted.